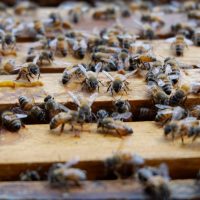 The four-game series finale between the Reds and Giants was delayed after a swarm of bees took over the field at Great American Ball Park. Fans were cleared out of the seats behind home plate as well. This wasn’t the first time due to bees though there hasn’t been a bee delay in Cincinnati since 1976.