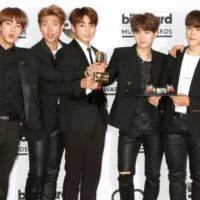 BTS’s hit single, “Butter” has topped the Hot 100 chart for the seventh straight week in a row. “Butter” extends its record as the longest-running No. 1 hit on the Hot 100 by any Asian act in history, and also continues to be the song with the longest No. 1 streak from its debut on the chart by any group since Mariah Carey and Boyz II Men did so with “One Sweet Day” back in 1995.

“Butter” was also the top-selling song of the week and topped the Digital Song Sales chart for the seventh week, placing No. 21 on the Radio Songs chart and No. 26 on the Streaming Songs chart. The song also placed No. 10 on the Pop Airplay chart, becoming their second Top 10 hit on the mainstream Top 40 radio-based chart.

BTS is the first all-Korean act with multiple Top 10 hits on the Pop Airplay chart.  The group’s latest single, “Permission to Dance,” was released on July 9 and is expected to debut on next week’s Hot 100 chart.