Machine Gun Kelly has announced his 27-date Tickets To My Downfall tour, kicking off in Minneapolis on September 9 and running through December 18 when it wraps up in MGK’s hometown of Cleveland, Ohio. Pre-sale for the tour begins April 27 with the general sale beginning on April 30. You can also enter to win tickets now with 92.9 The Beat! Read full article >>

On Tuesday, Billie Eilish revealed on social media that the follow-up to her 2019 debut When We All Fall Asleep, Where Do We Go? is titled Happier Than Ever, due out July 30th.  Eilish said it’s her “favorite thing i’ve ever created and i am so excited and nervous and EAGER for you to hear it. i can’t even tell you. i’ve never felt so much love for a project than i do for this one. hope you feel what i feel.” Read full article >>

South Korea’s BTS will be releasing a new English-language track titled “Butter” on May 21. The group’s record label, Big Hit Music, and Columbia Records, made the announcement on Twitter. Big Hit Music released a short animated video of a heart-shaped piece of butter sliding until the release date appears. Read full article >>

Billie Eilish took to Instagram on Monday, April 26 to share a teaser of her new song, captioning a video clip “Happier Than Ever” — in what appears to be the title and from the music video. Read full article >>

DJ Khaled has enlisted Justin Timberlake and Justin Bieber for his upcoming album Khaled Khaled. Khaled shared a screenshot of Timberlake, 40, and Bieber, 27, on an unanswered call, along with the message: “I’m so stressed out in a good way mixing and mastering this album I missed the legendary FaceTime of the ICONS @justinbieber and @justintimberlake.” Read full article >>

On Saturday, April 24, Saturday Night Live announced that Miley Cyrus will return as a musical guest on May 8. The episode will also feature SpaceX and Tesla CEO Elon Musk, who will make his hosting debut.  Read full article >>

Miley Cyrus teases ‘Without You’ remix with The Kid Laroi

Miley Cyrus teased the “Without You” remix with The Kid Laroi on social media, sharing a 12-second video on Twitter saying:  “Snuck into his car while he wasn’t looking and sent him this video.”  Cyrus captioned the clip “…where are we going @thekidlaroi? BTW I think they want us to drop the remix.” Read full article >>

The Weeknd & Ariana Grande to release ‘Save Your Tears’ remix

The Weeknd and Ariana Grande both confirmed on social media  their “Save Your Tears” remix. The new collab comes two days after the duo teased an eight-second audio snippet on Twitter of their breathy vocals harmonizing the lyric “I don’t know why I run away” from “Save Your Tears.” Read full article >>

K-pop band BTS has teamed up with McDonald’s for their latest Famous Orders promotion. The BTS meal includes a 10-piece Chicken McNuggets, medium fries, a medium Coke – and, new in the U.S. – Sweet Chili and Cajun dipping sauces. The company says the new sauces are inspired by popular recipes from its restaurants in BTS’s home country of South Korea. Read full article >> 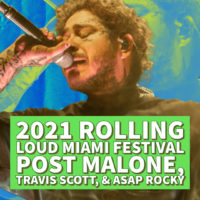 Rolling Loud Miami has announced the full lineup for the 2021 festival, which will take place from July 23rd-25th at Hard Rock Stadium in Miami Gardens, FL. Travis Scott, Post Malone and A$AP Rocky will headline the event, the same acts who were supposed to take center stage in 2020. Read full article >>

April 21, 2021 DayPop_Pop, The Latest Leave a reply
The nominees were announced for the 2021 MTV Movie & TV Awards, which will be taking place over two nights on May 16 and May 17. The ceremony will be broadcast from the Palladium in Los Angeles on May 16 to honor the best in film and television. The network will then present the first ever MTV Movie & TV Awards: Unscripted on May 17, which will focus on reality television.Marvel’s WandaVision leads the TV field with five nominations. Borat Subsequent Moviefilm leads all films with three nominations, followed by Judas and the Black Messiah with two. Emily in Paris, RuPaul’s Drag Race and The Boys each earned three nominations on the television side. RuPaul’s Drag Race also leads the unscripted categories with four nominations. Read full article >>

Polo G’s new single “Rapstar” has debuted at No. 1 on the Hot 100. The tune in the biggest song of Polo G’s career, and also marks his second appearance on the top 10 following last year’s “Hate the Other Side,” which was featured on the late Juice WRLD’s first posthumous album Legends Never Die. Read full article >>

April 20, 2021 DayPop_Pop, The Latest Leave a reply
According to authorities in Texas, “American Idol” contestant Cecil Ray Baker was arrested after he forced his way into the home of his ex-girlfriend Mariah Lopez, and struck her in the face when she refused to let him see the child he believes is his. According to Lopez. after she wouldn’t allow Baker access, he went to a locked back door and ripped it open to gain entry, then pushed her to the floor and “struck her in the face with a palm heel” before leaving. Read full article >>

Julia Michaels announces her debut album ‘Not In Chronological Order’

Julia Michaels has announced the release her debut studio album, titled Not in Chronological Order, on April 30, 2021. Read full article >>

Taylor Swift’s Re-Recorded ‘Fearless’ Debuts at No. 1 on Billboard 200

More than 12 years after Taylor Swift earned her first No. 1 album on the Billboard 200 chart in 2008 with Fearless, she’s on top with a re-recorded version of the album, titled Fearless (Taylor’s Version). Thd album is Swift’s ninth No. 1 and scores the biggest week of 2021 for any album. Read full article >> 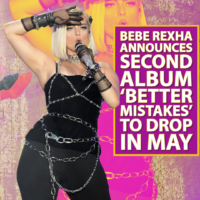 Bebe Rexha has announced her upcoming second album, ‘Better Mistakes’ will be released on May 7. Bebe also shared the album’s artwork on her official social media channels, and later posted to confirm that her new single ‘Sabotage’ will be arriving today, April 16. Rexha wrote: “One more surprise since it doesn’t seem like you all can wait any longer for this one… #SABOTAGE out Friday!” Read full article >>

Rina Sawayama has released a new version of her song “Chosen Family,” featuring Elton John. The new track comes with a music video featuring Sawayama and Elton John performing together at the piano.  Read full article >> 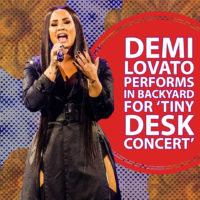 Selena Gomez will serve as host of Global Citizens’ upcoming Vax Live concert, which will feature performances from Jennifer Lopez, Eddie Vedder, Foo Fighters, J Balvin and H.E.R. Vax Live: A Concert to Reunite the World will promote the COVID-19 vaccine and call on world leaders to ensure that vaccines will be available to everyone globally. Read full article >>

Bad Bunny has announced the El Último Tour del Mundo 2022—a tour named for his 2020 album of the same name. The tour will run from February to April 2022 across North America, and tickets will go on sale April 16 at 12 p.m. The announcement video features WWE star Triple H, who praised Bad Bunny’s performance in the ring at WrestleMania 37 on Sunday.  Read full article >> 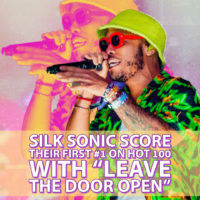 Anderson .Paak and Bruno Mars released “Leave the Door Open,” in March, their first collaboration as the group Silk Sonic. The track was an instant hit on social media, and has now finally hit the top spot on Billboard Hot 100. “It is now safe to wear your bell bottoms all week,” Paak wrote on Instagram. “Leave The Door Open is the number 1 song in the country and I can’t thank y’all enough! @brunomars we poppin bottles in the Stu today I’m otw champ!” Read full article >>