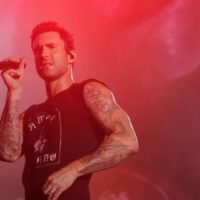 Maroon 5 has officially released their seventh full-length album, JORDI.  JORDI is the band’s most personal album, with the title being a tribute to the group’s original manager Jordan Feldstein. Frontman Adam Levine shared the following on Instagram: “I miss him every single day. And I’m proud to have etched his name into the history of this band that he helped build from the ground up…every step of the way. We love you Jordi.”

Additionally, the band just shared the music video for the new single “Lost,” directed by recent collaborator Sophie Muller. Check out the video for “Lost”…

Maroon 5 will embark on a full-scale North American headlining tor in August, following the postponement of their tour in 2020.  The tour kicks off on August 10 in Auburn, WA at White River Amphitheatre and makes stops at Wrigley Field in Chicago, IL on August 30 and Fenway Park in Boston, MA on September 12, as well as a  hometown headline show ever at the new Banc of California Stadium in Los Angeles, CA on October 2 before the tour comes to a close on October 8 at Concord Pavilion in Concord, CA.  blackbear will serve as support on all tour dates.