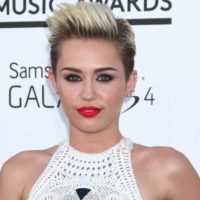 Miley Cyrus teased the “Without You” remix with The Kid Laroi on social media, sharing a 12-second video on Twitter saying:  “Snuck into his car while he wasn’t looking and sent him this video.”  Cyrus captioned the clip “…where are we going @thekidlaroi? BTW I think they want us to drop the remix.”

….where are we going @thekidlaroi? BTW I think they want us to drop the remix. pic.twitter.com/grKoKHvACx

The video was the second sneak peek at Miley’s upcoming remix of the 17-year-old LAROI’s 2020 single “Without You,” coming after a 20-second clip that blended the original song over footage of Miley making faces as headlines about her dating life scrolled in the background.

“Without You” was featured on the deluxe SAVAGE version of LAROI’s F*ck Love July 2020 mixtape debut. The duo have been teasing their remix for months, with The Kid posting a studio pic with Miley last month.

Miley Cyrus Teases New ‘Without You’ Remix with The Kid Laroi In New Video!