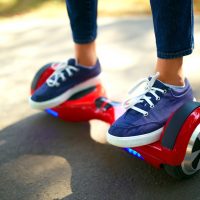 We’ve all seen those videos of people crashing into walls, but the most common hoverboard injuries aren’t due to recall.

A new study reveals that the most common injuries kids get when using hoverboards. Turns out most injuries were unrelated to the overheating batteries that sparked numerous recalls.

Boys between 11 and 13 years old were the most likely to get hurt and their injuries were what you might expect if they had been riding a typical skateboards instead of “futuristic” hoverboards.

Two kids got injuries from riding a hoverboard in the kitchen and colliding with a stove of boiling water. Ouch.

Another kid got a friction burn after their finger was run over by a hoverboard.

Kids most frequently got hurt from falls, damaging their wrists, forearms and heads. About 40% of the injuries were fractures, but bruises and sprains were common as well.

So remind me to never get on a hoverboard.