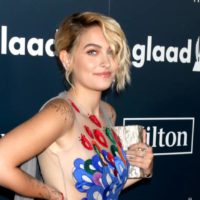 Paris Jackson, the late Michael Jackson’s daughter, is joining the star-studded cast for season 10 of Ryan Murphy’s American Horror Story. Jackson, 23, is rumored to be starring in at least one episode this season, which will be split into two mini-seasons. Titled American Horror Story: Double Feature, Season 10 will include ‘one story by the sea, and one by the sand.”

Paris will be joining her godfather, actor Macaulay Culkin, on the show. Series creator Ryan Murphy recently dropped the full cast list for the upcoming series, which will see the return of Sarah Paulson and Evan Peters – as well as newcomer Kaia Gerber, the daughter of supermodel Cindy Crawford.