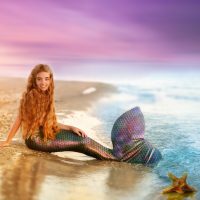 In anticipation of the soon to be released live action Little Mermaid, ABC did a live broadcast performance featuring artists such as Queen Latifah as the witch Ursula, Shaggy as Sebastian, and John Stamos as the royal chef! Watch Auli’i Cravalho perform “Part of Your World” from The Little Mermaid Live! on ABC.