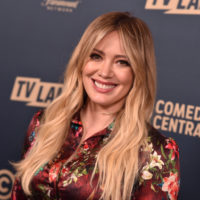 We’re getting more details as to why the plug has officially been pulled.

I don’t know about you, but when Disney+ announced a Lizzie McGuire reboot, I immediately created an account. I was here for it.

Imagine my disappointment when the stars of the show announced the whole project had been scrapped.

If we follow the breadcrumbs, we see Hilary Duff had been leaving us hints about the show’s demise. But when series co-creator Terri Minksy was fired from the project, we should have known that was a bad sign!

I guess the crew and Disney could not see eye-to-eye on the angle of the show. Hilary wanted it to be true and authentic to a 30 year old lifestyle and Disney wanted the reboot to be family friendly (think Girl Meets World).

Hilary begged Disney to push the show to Hulu like they had previously done with more serious shows like Love, Victor but that was a no-go.

The cast of the McGuire family say they’re perplexed. How is it that despite some exec’s needing to greenlight the project every step of the way, how did they make it all the way to filming two episodes of the show before Disney higher ups pulled the plug?!

Does somebody have it out for Lizzie?