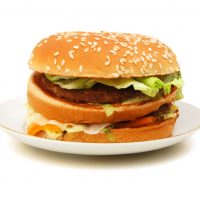 These companies will do anything to get you their food!

Which includes partnering with all these delivery companies.

Like McDonald’s with Uber Eats. I just saw a commercial for Subway saying they deliver. Which sure they deliver, through any of the numerous sites like DoorDash and GrubHub and whatnot.

Burger King is taking it one step further and it’s kinda scary almost.

Burger King wants to deliver food to you while you’re stuck in traffic!

It’s called the Traffic Jam Whopper and what Burger King does is scan real-time traffic data, specifically through the traffic app Waze.

They can tell when there’s a traffic jam and then they’ll then put ordering info on billboards nearby you. That way you can place your order and once you’re in their delivery zone you’ll get a fresh, hot whopper from a dude on a moped.

The trial was reportedly a WHOPPING success, in one week, orders rose 63 percent, and the daily app download rate increased by 44 times.

They’ve been testing this in LA, Sao Paolo Brazil and Shanghai. No word yet on future plans.

Looks like the Traffic Jam Whopper is the future and being hangry is a thing of the past!