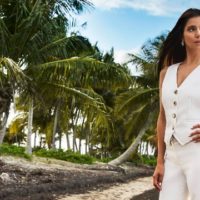 The actress tells ABC Audio that she remembers the original series well. “I was born and raised in Puerto Rico. So I remember it was the 70s, I was young, but everybody knows when you say Fantasy Island — for me, it was La Isla de la Fantasia. You know, I was very familiar with the show and I remember that, Tattoo and Ricardo Montalban. I remember ‘The plane, the plane!’ In my case, it was ‘La avion! La avion!’

Sweetening the deal for Sanchez, the new series was shot in her native Puerto Rico. “I was actually going to go back to my homeland. To do it was a dream! It was incredible,” she says.

Sanchez adds of her series, “The original was maybe a more mysterious [show]. You know, the Roarke character was not as involved with the fantasies and the guests. This time around, she’s very human, she’s very much involved, and she feels for them, and she’s also going through her own self discovery.”

The first Fantasy Island ran on ABC from 1977 to 1984. Fantasy Island was rebooted in 1988 but only lasted a season. It was also made into a poorly-received horror film of the same name in 2020, with Michael Peña in the lead.

Sanchez adds, “[I]n the end, we just want people to have a good time. And it’s visually stunning…it’s well acted, it’s well-written, and so I’m hoping that people are going to embrace it and love it as much as they did the original.”