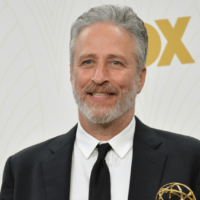 The teaser features close-up shots of Stewart dressing as he gets ready to go on air, with the camera zooming out to show the comedian seeing his face in a mirror – “Ahhh! What the hell happened to my face?” Stewart says before adding, “Why would I go back to a visual medium? I could have done a podcast.”

‘The Problem with Jon Stewart’ will premiere Sept. 30, with subsequent episodes to air every other week. Stewart will host and executive produce the series, which will also feature a companion podcast.

“It feels like Christmas!” Watch Andrew Garfield nerd out after getting greeting from ‘Cobra Kai’ cast

“Our hearts are shattered”: Lacey Chabert mourns the death of her sister, Wendy

As Amazon takes victory lap for ‘The Wheel of Time’ debut, it’s eyeing series based on ‘Mass Effect’ video game

Kim Fields goes all out for the holidays — take-out, that is